Ah, summer – a time for swim suits, family vacations, sun-tans, sunblock, sun glasses, and sun. It’s a time to relax and go about trying to stay cool in the shade with a cool drink. Unless you’re Tim Rogers. And it’s August, 2012. 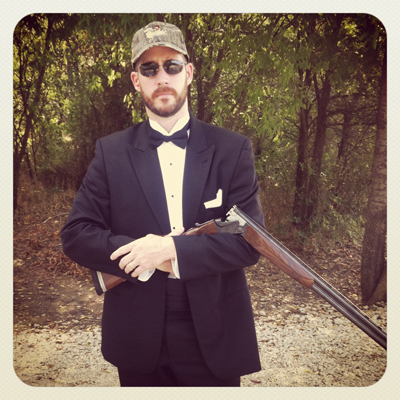 You might be cool, but you’re not Black Tie Shotgun cool.

August is many things to many people.  It’s the culmination of the summer experience for most folks.  Nationally it’s the hottest month of the year.  It also marks the beginning of the school year for a lot of people.  And for most of us, it’s a time to relax and try our best to stay cool.  But in 2012, one man went a different way.

Tim Rogers, Editor of D Magazine in Dallas, TX accepted a challenge, sponsored by Patrón XO Cafe and Al’s Formal Wear.  The challenge: Wear a tuxedo – every day – for the entire month of August.  That’s right.  A Tuxedo.  In August.  Now, remember he’s from TX.  If you aren’t impressed yet, you aren’t from the South.

For one month, this incredible and relentlessly stubborn man opted to not only wear a tuxedo for the entire month, but also to chronicle his journey every step of the way.  From mowing lawns to grocery shopping to disc shooting and water skiing, Tim Rogers did it all, in a tuxedo, and lived to write about it.  And why, you might wonder, would anyone do such a thing?  That’s the brilliant part.

So what did he win?  I’m glad you asked.  After a month in a tuxedo, Tim Rogers won a really nice custom made tuxedo of his choosing to keep.  And never in the history of formal wear has a tuxedo so deservedly been owned.  I doubt you’ll see him this summer, or any summer, donning a tuxedo again.  But you’ll know that he has one now – and he can wear it whenever and wherever he likes.

Check out Tim’s Blog Series: The Great Tuxedo Challenge to learn more about his trials and adventures along the way.  And remember to scroll down first and start at the beginning.

Also check out Tim’s appearance on the news!

Like this Post? Hate it? Can’t keep quiet? Can barely contain yourself? Well… then don’t. Tell us what you think in the comments section below!