Paul Morrell Formalwear regularly tracks the rental data for all of the tuxedo styles we offer and determines which ten coats were the most rented for the previous month. Today we’re taking a look at which ten tuxedo styles rented the most throughout the entire year of 2011!

In review, 2011 was an excellent year for growth within the rental formal wear industry.  We saw a general return to formal attire as the trend towards formal tradition took more of a foothold in the public eye.  People everywhere are dressing more formally for formal occasions.  As indicated and supported by Hollywood Award Ceremonies like the Golden Globes, the Emmy’s, and the Academy Awards that continue to showcase more traditional formal styling, the emphasis on formal wear is rising.

While this is clearly great news for us, we like to think that this formal upturn is good for everyone.  The more that people perceive formal wear as an established mode and opportunity to commemorate special occasions, the more special those occasions will feel.  The pictures taken will stand up to the test of time that much longer.  The memories created will be that much richer.  We call that a win-win.

Leading the way in this formal upturn are ten tuxedo styles that, consistently all year, proved to be the crowd favorites.  Paul Morrell Formalwear regularly tracks the Top 10 monthly rental styles, but the following results are even more conclusive.  While some styles can quickly rise and fall in popularity month to month, the styles listed below represent the most rented styles all year round.  This long-term trended data helps us (and you) to determine which styles are fleeting trends and which are mainstays in the current formal climate.  Without further adieu, here are the mainstays: 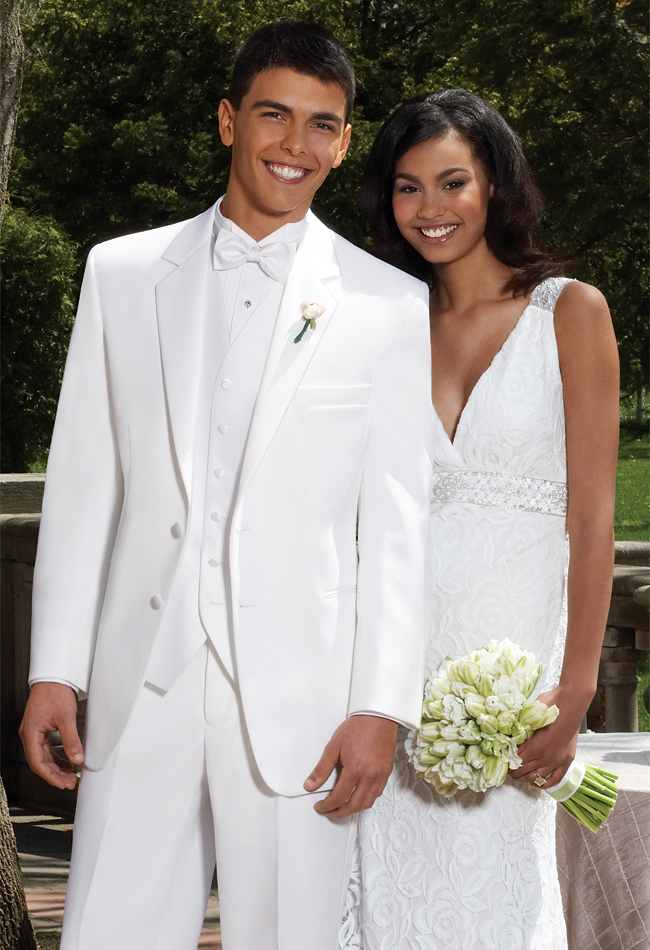 “The White ‘Troy’ Tuxedo by After Six is a wonderful formal option for daytime functions and warm weather climates.”

As the 10th most commonly rented tuxedo in 2011, the White ‘Troy’ Tuxedo by After Six represents the white formal wear corner of the market.  White formal wear is most popular in the warmer months of the year and is always in high demand during peak seasons.  It’s perfect for proms, weddings, destination weddings, and any other tropical or daytime formal function. 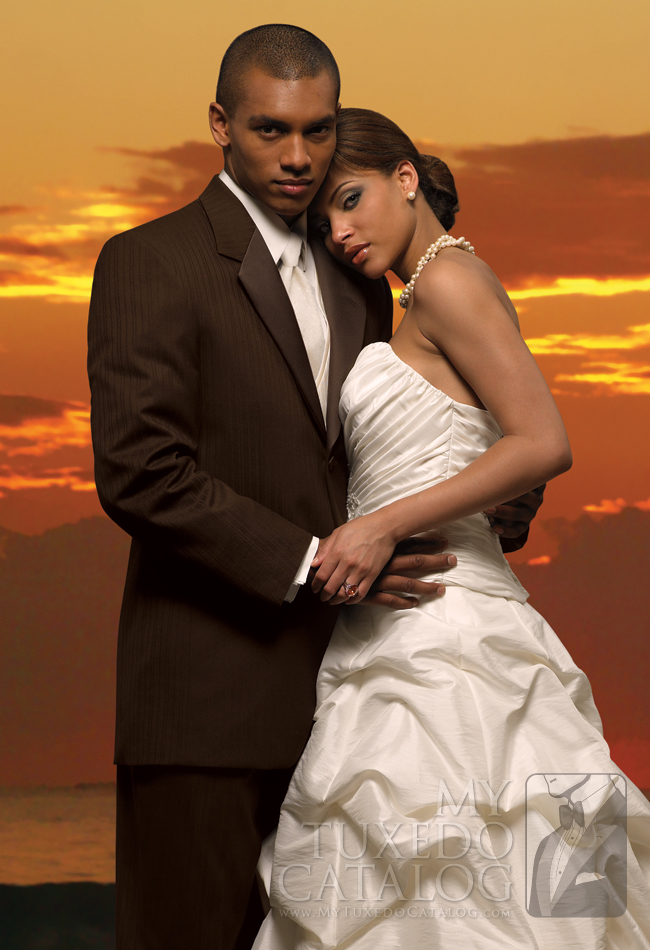 “Not a black and white kind of guy? No worries! The Chocolate ‘Parisian’ Tuxedo by Jean Yves combines unbeatable fashion and intangible class for just the look you’re going for.”

Coming in as the 9th most popular rental tuxedo for 2011 is the Chocolate ‘Parisian’ Tuxedo by Jean Yves.

Featuring a tonal brown stripe and originally marketed as “A Formal Wear Revolution” the Chocolate ‘Parisian’ Tuxedo combines current fashion and intangible class for a look that’s both formal and out-of-the-box.  Perfect for any day you want to make Your day. 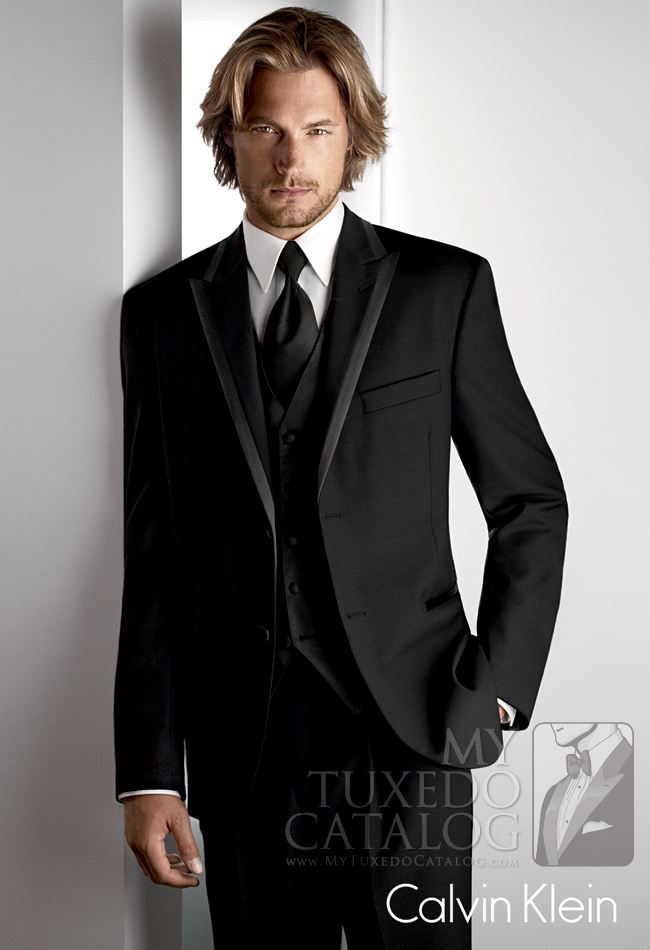 “Want to go traditional AND look better than everyone else in attendance? Look no more. The Black ‘Arden’ Tuxedo by Calvin Klein has what you’re after.”

Every generation since the mid 1920’s has attempted to tweak and update the classic tuxedo in such a way that identifies the ensemble with that era.  Some of those attempts are hits and some are misses.  As the 8th most popular rental tuxedo for 2011, it’s safe to say that the Black ‘Arden’ Tuxedo by Calvin Klein is an overwhelming hit!

Featuring a 2-button front and updated satin trim on the otherwise classic peak lapel and top collar, this style is both contemporary and classy.  It’s no wonder it has rented so well!  As formal trends stay strong and continue to grow, we predict this style’s popularity will do the same. 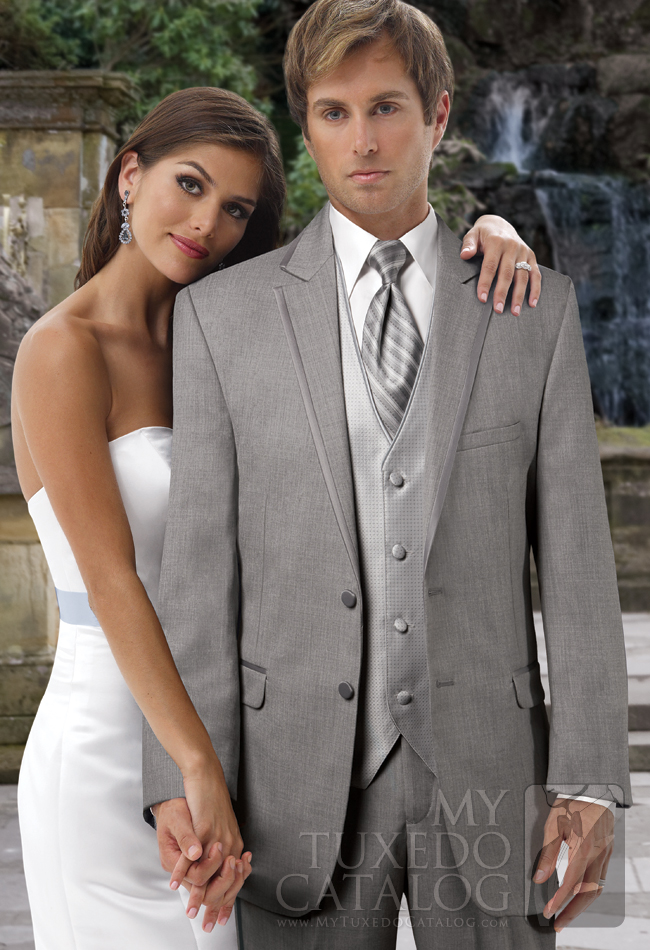 “Life is full of varying shades of grey. This may be one of the best. The Heather Grey ‘Savoy’ Tuxedo by Jean Yves is an eye-catching formal crowd pleaser.”

Predictably, the 7th tuxedo on this list is none other that the Heather Grey ‘Savoy’ Tuxedo by Jean Yves.  I say that this isn’t a shocker because this tuxedo, and grey tuxedos and suits in general, have continued to rent incredibly well all year round.  It’s easy to see why.

Much like the CK ‘Arden’ Tuxedo in the 8th position, the Heather Grey ‘Savoy’ features a classy two button front and satin trim on the lapel and top collar.

This tuxedo has consistently rented well all year round, though it typically rents best during the peaks of prom season and wedding season.

Because of its light material, this style is perfect for any warm weather or daytime formal function. 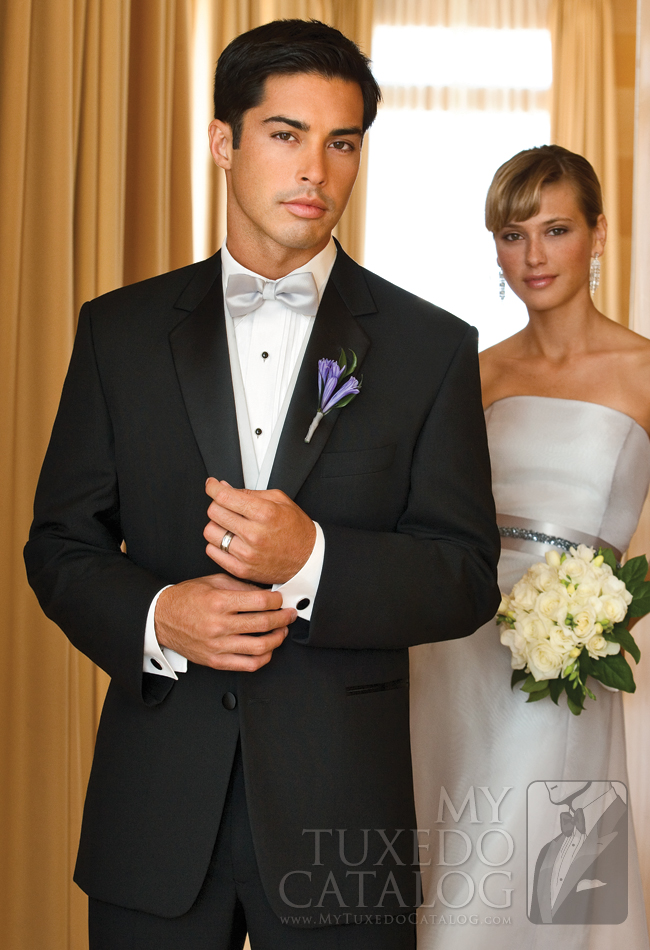 “The Black ‘Troy’ Tuxedo by After Six is a classic, elegant, and updated solution for any traditional formal need, perfect for a wide variety of formal events.”

While grey tuxedos have captured a significant portion of the limelight in 2011, black formal wear will always be the backbone of this industry.  As a strong #6 in the Top 10 list for 2011, the Black ‘Troy’ Tuxedo by After Six is a sure bet.

Featuring the same design that earned the White ‘Troy’ a spot on the Top 10 list, but fashioned from always-appropriate black tropical worsted wool, the Black ‘Troy’ Tuxedo is classy, basic, and strong all year round.

While other shades of tuxedos do very well at certain times of the year, black hits every mark.  From prom season, wedding season, destination weddings, black tie events, holiday party season, etc., this style has found a welcome spot at every venue in every season. 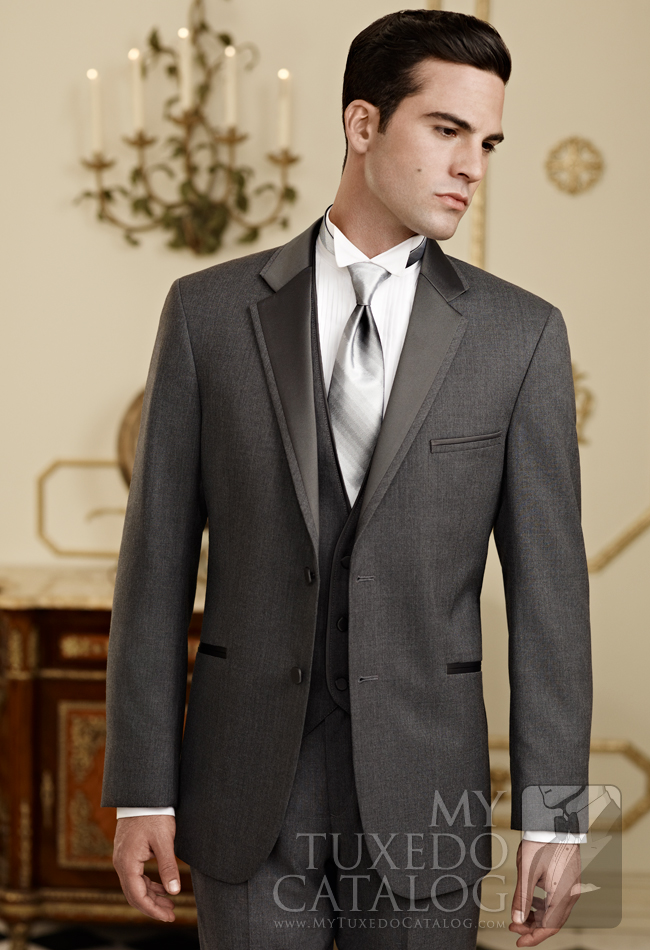 “Sometimes it’s okay to stare. With the Steel Grey ‘Twilight’ Tuxedo by Jean Yves, you may get a lot of that. This coat is sure to get a lot of admiring gazes at any formal venue.”

Now that we’re down to the top 5, we’re getting into the real heavy hitters.  Just added to our rental selection in 2011, the Steel Grey ‘Twilight’ Tuxedo by Jean Yves has done nothing but ‘wow’ us with the consistent demand and attention it has garnished.  While this style is a relative newcomer, it has definitely earned its keep, coming it as the 5th most popular rental tuxedo for 2011.

Featuring a 2-button front and a satin notch lapel and top collar with self trim, this darker grey tuxedo has been a big part of why grey tuxedos and suits have done so well this last year.

Consistent with the other grey tuxedos and suits we offer, the Steel Grey ‘Twilight’ Tuxedo seems to peak in demand during prom season, wedding season, and summer months, but stays a strong renter all year round for daytime formal events. 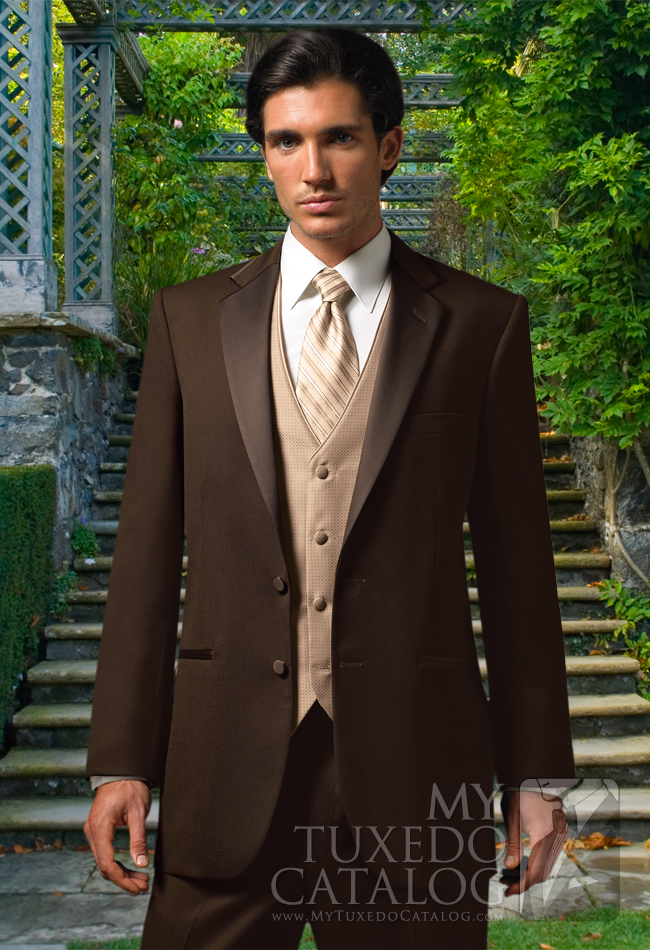 “Not a traditionalist, but want to look outstanding? Good news. The Chocolate ‘Premier’ Tuxedo has the style, class, and hue to make your wish come true.”

If you’ve kept up with our monthly Top 10 reviews for 2011, you know this style well.  Now the 4th most popular rental tuxedo of 2011, the Chocolate ‘Premier’ Tuxedo by Jean Yves has appeared on nearly every Top 10 list we’ve published in the past few years.

In 2011 in particular, brown and grey tuxedos were constantly vying with each other for the largest number of positions on each Top 10 list.  While grey ultimately won out, the Chocolate ‘Premier’ was and is the clear favorite within the brown tuxedo category.

With it’s simple and elegant 2-button front, satin notch lapels, clean silhouette, and intangible aesthetic that brown formal wear is known for, it’s easy to see how this style has rented so well.  We expect this trend to stay strong and set new records for the 2012 prom season. 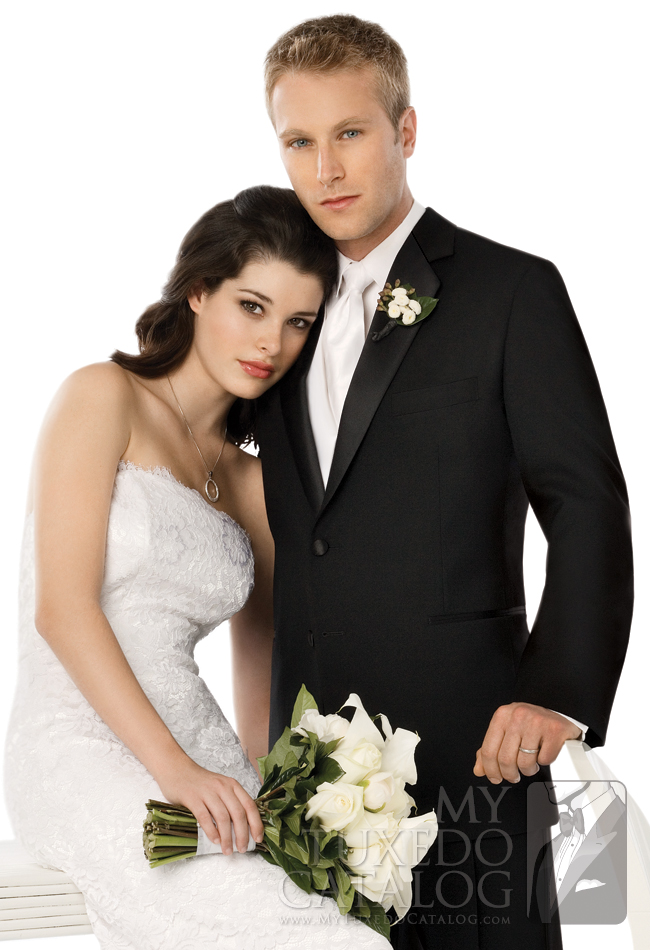 “Simple, timeless, and always elegant, the Black ‘Chaplin II’ Tuxedo by After Six is a formal classic that will never disappoint.”

As I stated before, black formal wear will always be the backbone of this industry.  And again, when it comes to formal wear, simple and elegant just can’t be beat.  These ideals are well represented in the 3rd most popular rental tuxedo for 2011.

While the Black ‘Chaplin II’ Tuxedo by After Six isn’t strict black tie attire, it does represent a very popular millennial update to the classic uniform.  The satin notch lapels have been a popular alternative to traditional peak lapels ever since Sean Connery’s James Bond character tried one on.  The 2-button front is also a popular update, as was showcased in this year’s Golden Globe Awards.

This simply classy tuxedo style is a great basic formal option all year round for every occasion.  This style doesn’t just rent well in peak seasons.  This coat rents well all the time.  For proms, weddings, destination weddings, quinceaneras,  formal parties, or for your Oscar acceptance speech, the Black ‘Chaplin II’ Tuxedo is a great pick. 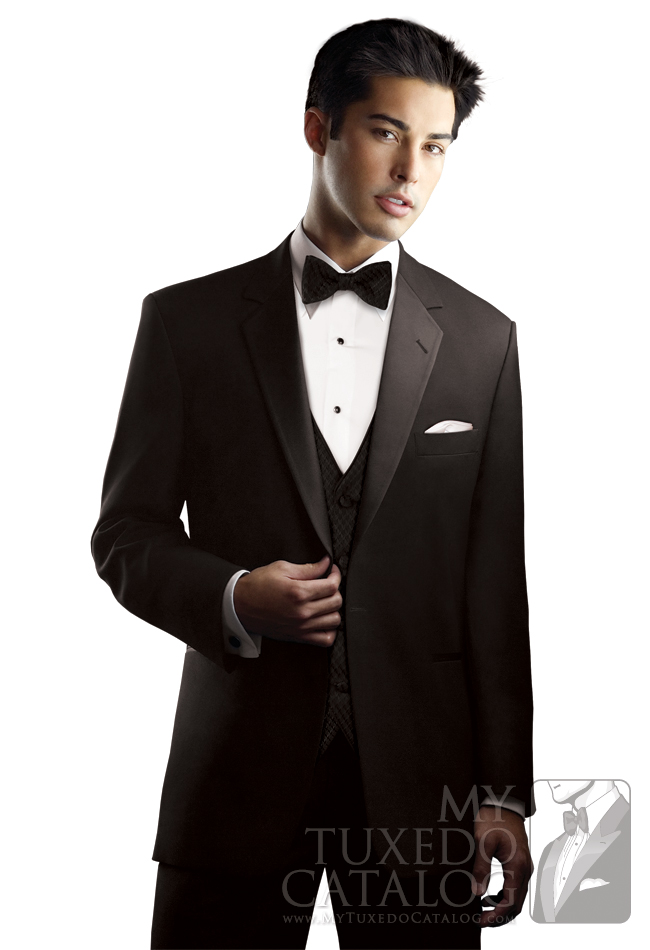 “Simple, timeless, and always elegant, the Black ‘Chaplin I’ Tuxedo by After Six is a formal classic that honors the time tested principles of Black Tie, providing the wearer an unparallelled masculine silhouette.”

Appropriately,  the runner up for the most popular tuxedo in 2011 is yet another even more classic tuxedo style, the Black ‘Chaplin I’ Tuxedo by After Six.  This style is exactly like the black ‘Chaplin II’ Tuxedo (#3) except that, as the name indicates, it features a 1-button front instead of a 2-button front.

The single breasted 1-button front style adheres to the principles of black tie formal tradition; and for good reason.  When the jacket is closed with a white shirt underneath, the deep ‘V’ of the white shirt creates a stark contrast that promotes wide shoulders and a thin waist, emphasizing the manliness in any physique.  Worn with a cummerbund or low ‘V’ vest, this effect will help you look your very best in the way that only a 1-button tuxedo can.

Echoing our summation of 2011, when the top 2nd and 3rd spots on the Top 10 list are both classic and traditional styles, we call that an undeniable trend towards more traditional formal styling. 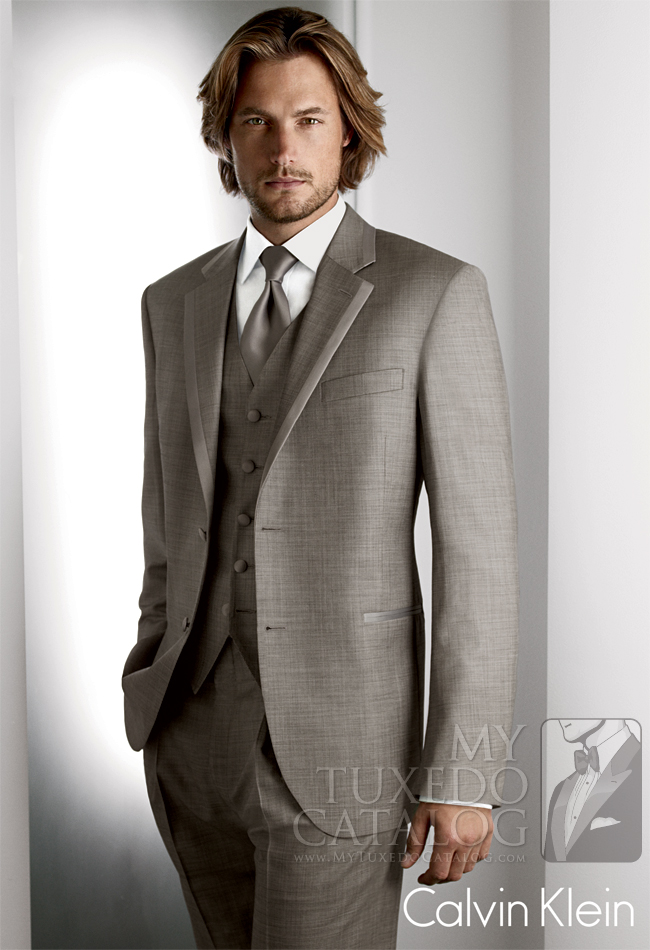 “The appropriately named Grey ‘Legend’ Tuxedo by Calvin Klein combines classic tradition with current fashion for a look that is, well, legendary!”

And Now…   The single most popular tuxedo style rented in 2011 is none other than the aptly named:
Grey ‘Legend’ Tuxedo by Calvin Klein!

When this tuxedo hit the scene, it hit hard and swept the market by storm.  Since then it has only gained momentum, garnishing demand during every season all year round.

Together with the other grey tuxedo styles on this list, grey tuxedos have tapped into a large market within the rental industry.  While the Grey ‘Legend’ is perfect for proms, weddings, destination weddings, quinceaneras, and other daytime formal function, it also crosses over to semi-formal venues; when you want to look great but black tie attire isn’t called for.

Stay posted for more monthly Top 10 news from Paul Morrell.  For a formal vendor, knowing what’s being sought after gives you a competitive edge in your local market. For a customer looking for just the right outfit, this gives you access to the most up to date style information available, so you can make the best decision for your important day! You can also look at past month’s Top 10 listing to find out which styles come and go, and which styles are mainstays in formal style.