Every month Paul Morrell Formalwear tracks the rental data for all of the tuxedo styles we offer and determines which 10 coats were the most rented for the previous month. This information is invaluable to businesses and consumers alike because everyone wants to know what’s in style right now. In a constantly changing and evolving environment, having up to date style information like this puts you way ahead of the curve.

Every year our April Top 10 list is of particular importance because, for most of the country, April marks the highest formal wear rental traffic of the year.  While this does vary regionally, most areas hold proms in April, and those proms create the most demand for formal wear that most local shops will see all year.  The styles that are featured in this months Top Ten List are strong indicators of which styles to bank on, for retailers and customers alike.

Black Tuxedos did the best, as expected, with 4 very classic styles, 3 within the top 4 spots.  The After Six Black ‘Chaplin I’ Tuxedo continues to hold the top spot, with the two-button version in the 2nd spot.

Grey Tuxedos also managed 4 spots on the Top Ten List, but generally didn’t rank as high as the Black Tuxedos did, with the Jean Yves Steel Grey ‘Twilight’ Tuxedo as the exception, holding the 5th spot, while the After Six Black ‘Troy’ Tuxedo held the 7th spot.

White Tuxedos are expected to show up on April’s Top Ten list, but did better than expected.  With only 2 spots left over on the Top Ten List, White Tuxedo styles occupied them both, leaving no room on April’s list for anything else.  Arguably the biggest surprise in April’s line-up is the Jean Yves White ‘Mystique’ Tuxedo, a style that doesn’t normally show up on the Top Ten List, in the 3rd position.  This indicates a very clear trend toward white tuxedos for prom going customers.  While white has long been a popular option for prom goers, this indicates that this trend could be growing.  Time will tell, and we’ll report. 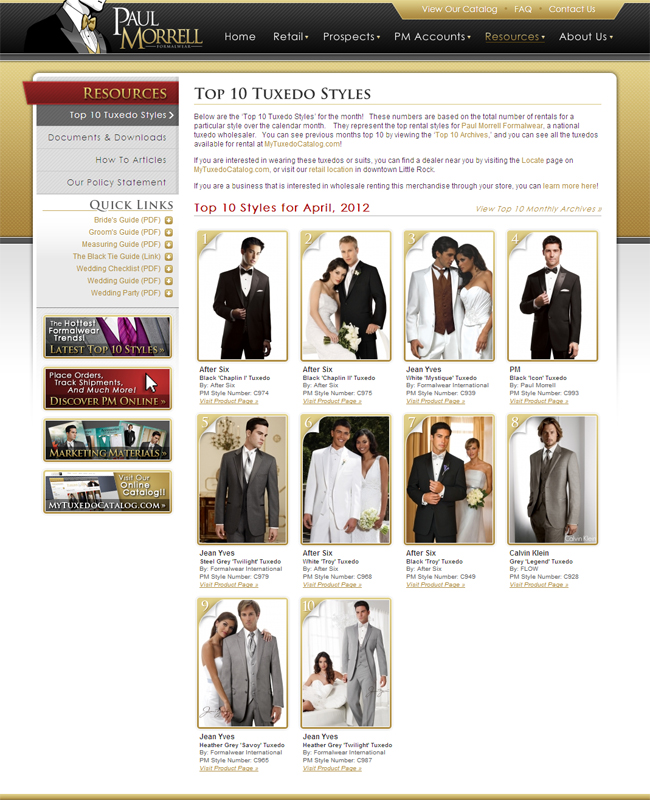 For a formal vendor, knowing what’s being sought after gives you a competitive edge in your local market. For a customer looking for just the right outfit, this gives you access to the most up to date style information available, so you can make the best decision for your important day! You can also look at past month’s Top 10 listing to find out which styles come and go, and which styles are mainstays in formal style.