Tuxedo Questions and Answers: What is the Difference Between a Tuxedo and a Suit?

“What is the difference between a tuxedo and a suit?”

– A lot of people

We hear this question a lot, and we’ve actually answered it in several other blog posts, but we’ve never dedicated an article completely to answering this question.  So today we’re going to talk about the physical differences between tuxedos and suits, the non-tangible differences, and the exceptions to the rule. 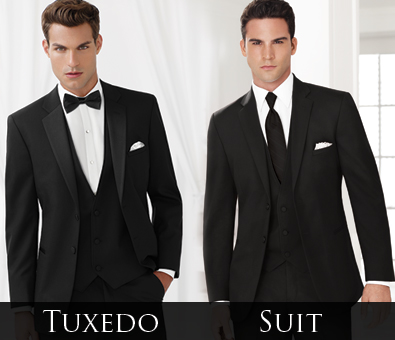 The primary physical difference between a tuxedo and a suit is the presence of satin.  Traditionally tuxedos have satin facing on the lapels, buttons, pocket trim, and a satin side stripe down the leg of the trousers.  Suits don’t incorporate any satin and usually have either plastic buttons or buttons faced with the same fabric as the coat (aka self buttons.)  Some modern tuxedo options have minimized the use of satin to a thin satin trim on the lapels and a thin satin bead down the pant leg, but the primary difference between the two is that tuxedos have satin on them and suits don’t.  Of course, to every rule there are exceptions.

Other physical differences like appropriate accessories generally only come into play when talking about traditional black tie standards.  For most modern tuxedo functions like proms and weddings, the lines between what is appropriate to wear with a tuxedo vs. suit have been blurred.  It’s common, though increasingly less so, to wear long ties and high stance vests with tuxedos.  However, this is traditionally a look only appropriate with suits.  Tuxedos are historically only to be worn with bow ties and cummerbunds or waistcoats (low stance vests.) 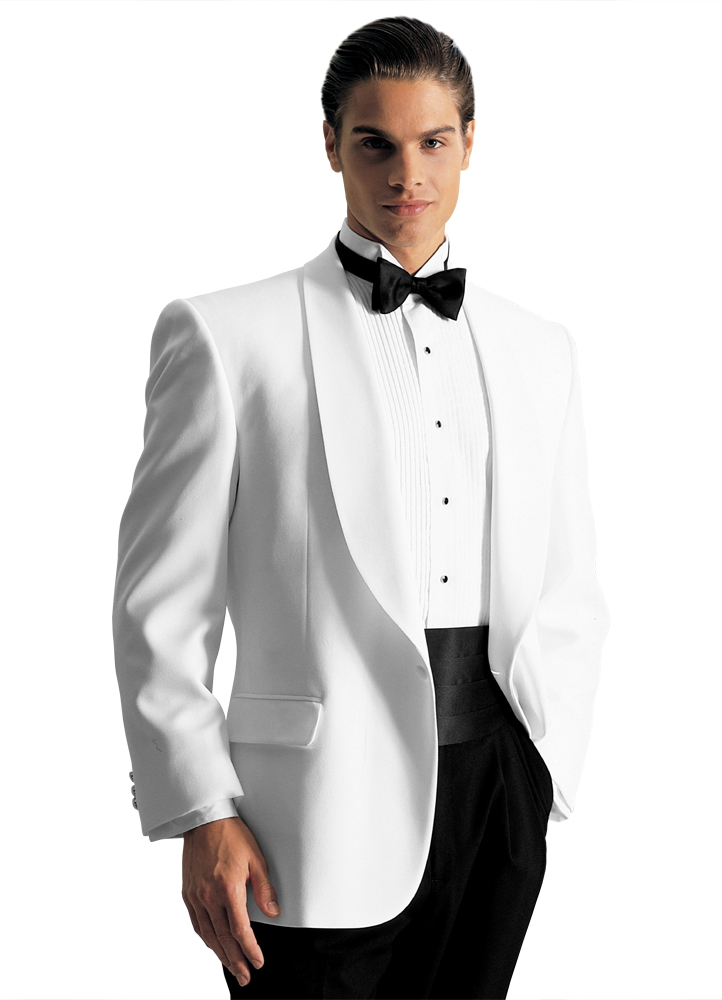 There are a few formal options, both traditional and modern, that don’t incorporate any satin.  The first is what is known as “Tropical Black Tie” or better known as a white dinner jacket.  This is traditionally worn with a white turn-down collar shirt, black accessories, black pants, and a white dinner jacket.  The jacket should have a 1 button front, self flap pockets, and a self shawl lapel.  It is a tuxedo, but not one that incorporates any satin.

A more modern satin-less tuxedo option exists in a few styles made primarily to cater to a growing demand in the wedding market.  Tuxedo lines like the Allure Men Tuxedo line by Jean Yves make nearly identical tuxedos, but in different colors.  While the black, steel grey, and heather grey tuxedos do incorporate satin, the tan and slate blue tuxedos do not.  Because they are part of a larger line of identical tuxedos, these are still considered tuxedos and are very popular options for both proms and daytime weddings. 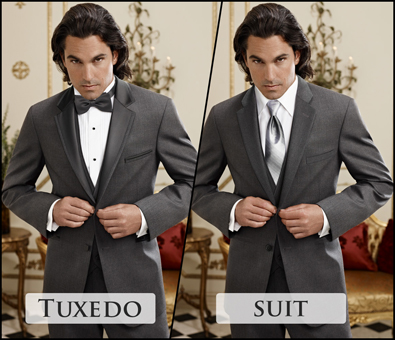 It’s important to note that, more than just the apparent physical differences, a tuxedo sends a different message than a suit does.  Some people (like me) tend to wear a t-shirt and jeans most days.  Some people rarely change out of their sweats.  And it would seem at first that, for any of us who rarely ever dress up, wearing a suit would send just as strong of a message as a tuxedo because it’s equally rare.  But it isn’t the case.  And here’s why.

A lot of people wear suits every day.  Regardless of whether you do or not, it’s a societal norm.  You can go to the grocery store wearing a suit and nobody will think it’s at all strange.  Should you opt to wear a suit to your wedding, for instance, there is a strong chance that others in attendance will also be wearing suits.  And it isn’t their wedding day.

The point of a tuxedo isn’t just to dress up and look nice.  That’s part of it, but only a part.  The point is to commemorate a special occasion by wearing something special that you wouldn’t wear anywhere else.  Your tuxedo says, “This moment is special to me.  This is where I want to be.  I would look out of place anywhere but here.”  That’s the point of it.  And that’s why, even if you look killer in a suit and even if you rarely if ever dress up in either, the two ensembles just aren’t equal for a truly special occasion.