We’ve seen a lot of exciting trends emerge this prom season.  Bow Ties, Grey Tuxedos and Suits, Midnight Blue, etc.  But today we’re taking a look at another extremely popular trend, why it’s so popular, and what this indicates as we move forward in fashion.  Enter the Slim Fit Tuxedo.

2013 is the first year that Paul Morrell Formalwear has offered slim fit tuxedos.  The Jackson and the Parker Slim Fit Tuxedos, both by manufacturer Ike Behar, have been very popular styles this year for prom.  Because this is the first year they’ve been offered, we were happily surprised by how popular they’ve been.  But when we really stopped to look at it, the trend made a lot of sense.  The Ike Behar Slim Fit Tuxedos are perfect for three key demographics. 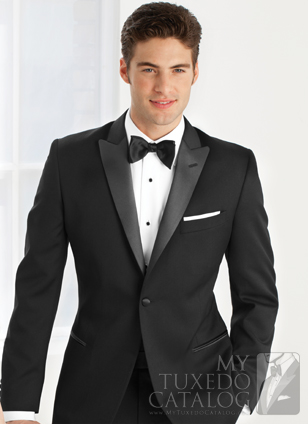 The Black ‘Jackson’ Slim Fit Tuxedo by Ike Behar is a black tuxedo with satin peak lapels and a single button front.  Also, it is fashioned from luxuriously soft Super 120’s wool.  This classic styling makes it perfect for any formal event because the look is timeless, versatile, and adheres to even very strict Black Tie interpretations.

Proms are very versatile formal events, so not everyone will be dressed to the nines in a Black Tie tuxedo, but that demographic is always represented.

Also, the Black ‘Parker’ Slim Fit Tuxedo by Ike Behar is a black tuxedo with satin notch lapels and a two button front.  While not strictly Black Tie attire, the look is still a classic.  In fact, two button tuxedos with notch lapels are the most commonly rented style for proms.

So often in formal wear, less is more.  Because both of these formal options are very classic and extremely versatile styles, it catches the attention of a wide prom demographic that wants to look classy and timeless. 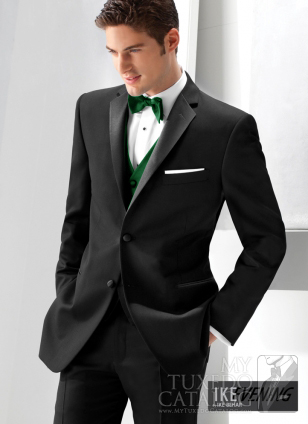 Maybe you’ve heard the term “Thin is In.”  If you have, or if you are at all fashion conscious, you’ll know that today’s trend setters are no longer opting for the baggier clothing that first gained popularity in the 90’s.  All of the current fashions revolve around a more tailored look.  While the Ike Behar Slim Fit Tuxedos aren’t actually tailored on an individual basis, they are designed to fit more closely to the body, with less excess fabric.

For the fashion conscious prom goer, one of the biggest fears is that the tuxedo won’t fit well, it will look baggy, or it won’t compliment your frame well.  While these aren’t problems necessarily inherent in rental formal wear, the are common concerns.  No other tuxedo alleviates those concerns better than these.

Because these styles are classic and more fitted, they capture the sizable “Fashion Forward” prom demographic as well, which goes a long way towards explaining their popularity. 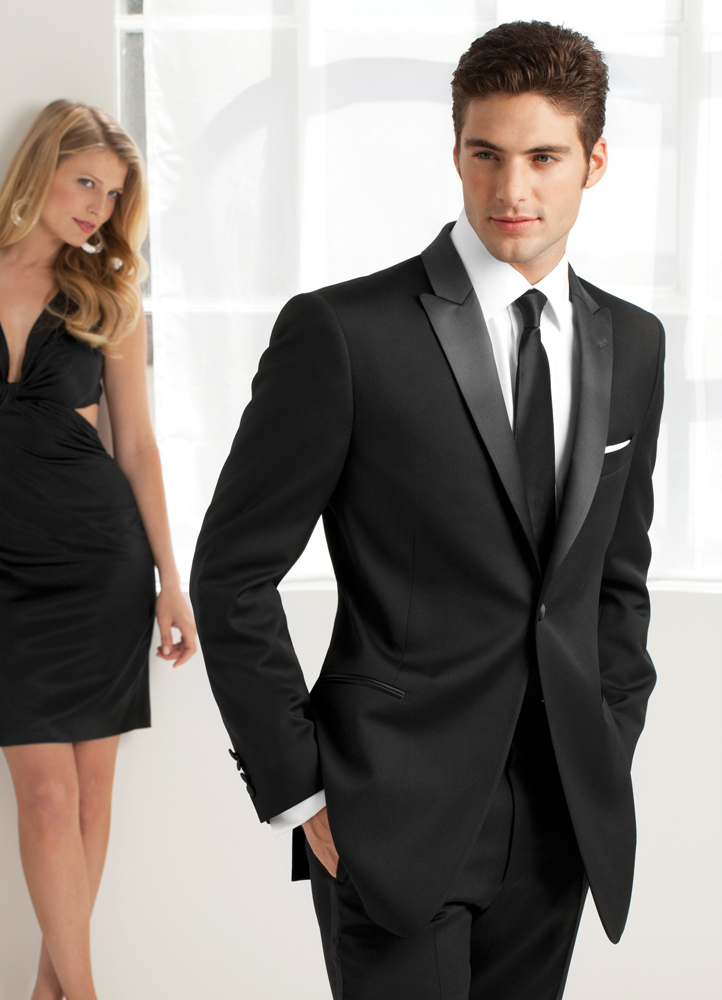 In 1934, a mystery movie was released by the name The Thin Man.  It was witty and a big hit.  We’re not talking about that today.  But we are solving a mystery:  What should a thinner-than-average guy wear to prom?

This may come as a shock but not all prom going guys have well established views on tuxedos.  Happily this tuxedo isn’t only for guys with a penchant for timeless looks or fashion forward styling (though it’s awesome when those things come together.)  Because these tuxedos are more fitted, they are the perfect option for thin young men.

Most rental formal wear is made to accommodate people of average proportion.  But not everyone is average.  If you’re a particularly thin fellow it can be difficult to find something that fits well.  Either the chest fits and the waist is too big, or it looks too short or too wide.  While it’s true that a thin guy can find a nicely fit size in modern cut and even classic cut tuxedos, the slim cut style is likely to compliment a thin frame better than any other.

For a long time, the youthful perception of tuxedos has been plagued by the imagery of a disgruntled young man in an ill-fitting tuxedo with badly slicked back hair and one red check where Aunt Bertha pinched it on his way out the door as he ushers his embarassed-for-him date off to prom.  Nobody wants that.  Except maybe Aunt Bertha – and we’re excluding her say here.

With new styles like the Ike Behar Slim Fit Tuxedos and other modern fit options, nobody has to go through that.  We have all the options available to make sure each prom goer looks his very best.  And with that, our goal is simple.  20 years from now, we want men to look back at their prom pictures and only regret their hair.