I’ll admit.  When I was a kid, he really just scared me.  The only time I saw THAT look was when I’d either broken something expensive or was about to get battered in dodge ball.  But as I got older and I understood the context, I began to appreciate his above average expectations of America.

And then, some time after I became a full fledged fan of formal fare, (try that 5 times fast), I noticed something else about Uncle Sam.  He’s actually dressed Very nicely.

Now here’s the problem.  Uncle Sam is so iconic that over time we’ve developed a rather exaggerated caricature of the original.  The exaggerated version of Uncle Sam has become, at least peripherally, what we associate him with.  And that version…  not that classy.  See the difference below:

What Uncle Sam Was Probably Wearing

In the Picture to the left, we see a more clown-like idea of Uncle Sam, fitted head to toe in sequins, over-sized features, with red and white stripes everywhere they’ll fit.  Taking nothing away from enthusiastic patriotism, it’s clearly far removed from the original image sketched by James Montgomery Flagg.

To the right, we’ve taken cues from the original image and tried to recreate an ensemble that more accurately befits our national symbol of duty and pride.  Here we see him in a navy cutaway tailcoat, complete with a very fashionable black velvet top-collar (A trend that I wouldn’t be surprised to see return in the next decade or so.)  Underneath he wears a formal wing-tip collar shirt and a self tied red bow tie.

Now, the trousers are up for some debate.  In the original image he has no trousers – mainly because he has no legs on which to wear them.  The picture is basically a head shot.  But it’s clear that because of the coat he’s wearing, he should be wearing striped trousers.  The common idea is that, to stay withing the patriotic color scheme, he’d be wearing red and white striped trousers.  But those aren’t sartorially correct.  We think he’d wear traditional hickory stripe trousers and that’s why they aren’t in the picture.

And there you have it.  Uncle Sam was a classy dresser – and I think it’s high time we acknowledged that.  Well played, Sir.  Fantastic job.

From all of us at MyTuxedoCatalog.com, please remember: 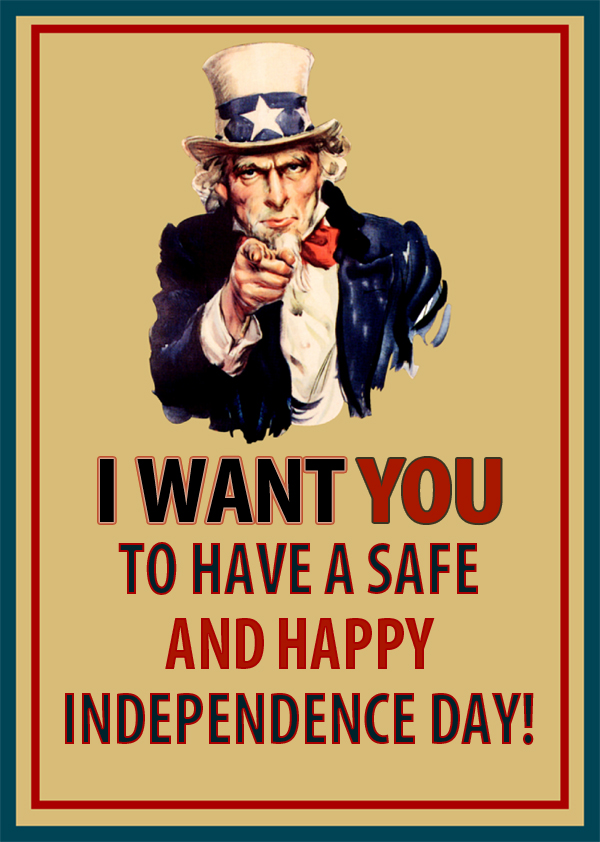 Want to stay classy like Uncle Sam?  Check out our selection of the best rental formal wear for men by visiting our Online Catalog!

Let us know what you think! Leave a comment below and let your voice be heard!